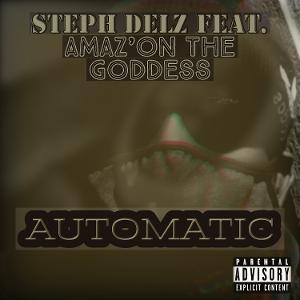 If Steph Delz has demonstrated anything, it is that he is not your typical rapper. While the general industry rarely touches on rawness or sincerity these days, Steph Delz does, and his latest track “Automatic,” featuring Amaz’on the Goddess, is further proof of that. Steph Delz has made a name for himself in the Hip Hop scene since his debut. His unmistakable, mesmerizing trademark sound is a very visceral listening sensation that is more visible today than ever in his current single “Automatic,” which is given with numerous vital defining factors that delve deep into the artist’s artistic excellence.

Following the notion that an artist’s creativity is defined by discovering methods to integrate beats and melodies, his raps have the correct mix of both. With his artistic attempts, Steph Delz appreciates the rap genre. “Automatic,” is a profound rap, which the rapper appears to have absorbed effectively. The track showcases Steph Delz’s skill in a fascinating and exceptional way, shedding light on his diverse approach. The imaginative lyrical eruptions are methodically constructed, providing “Automatic” with its own storyline and framework to offer a fantastic sense of skill, balance, and refinement.

Steph Delz and Amaz’on the Goddess have ensured that no area is overlooked, as each component of musicality has been constructed with the greatest zeal, establishing the musicians as formidable challengers in the music market. The production value strikes a happy medium between being theatrical while not overburdening the listener. This tune is as genuine as it gets, with its lively sounds and lyrical spits that share fitting commonalities.