Scientists have stepped in and made a discovery that there is quite no stronger bond and connection than the one created between alcohol and music! (They say that it is so strong it can melt dynamite!) We have sometimes had one of those nights where we decided to let loose and we gobbled down one too many and all this was engineered in part due to some deeply affecting music that the DJ happened to be playing that hit the raw nerves and invoked the drinking hell out of us- what followed were the rounds that started coming consistently to commemorate that ‘drinking feeling!’ 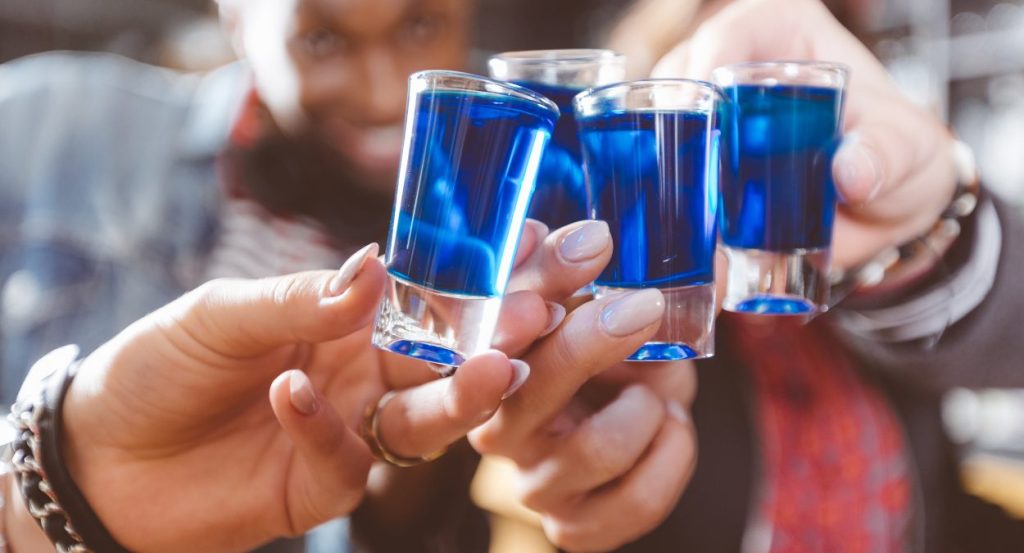 Don’t worry, I’m not out to give you a crash course on how to take shots. Rather, I’m here to give you my list of songs that are ideal for shot taking — whether it’s whiskey, vodka, tequila, or even beer… take a good look at this list of 13 songs to take shots to and consider these songs when you need music to complement that burning sensation of fire water as it goes down your throat.

You know how sometimes we feel bombarded by the staggering weight of the world and simply want to drink to that- this is the perfect track to drown your sorrows with an awful number of tequila shots while Cudi’s emotions reflect from within your inebriated soul like a mirror!

This song from his “Man on the Moon III: The Chosen” album transports you to the most inaccessible corners of the universe. It’s almost as if Cudi created and ran with his own genre—indescribably it’s addictive!

One word to describe this flavorful gem; tremendous!

Calvin Harris has always been way ahead of his time and this is one of those bangers that randomly pop up on your head and you feel an irresistible urge to listen to it over and over again!

If this is your birthday and you want to feel young again, invite a couple of friends, set up the system to surround the whole ambiance, buy out the vodkas from your nearest liquor store- pour them in equal amounts in those shot-designed glasses, pass them around to your eighty-something buddies and break your remaining bones (if you still got them!)

For once, I can’t believe this song was released over 9 years ago!

This is the type of tune that makes you want to tell your debts to take care of themselves. And when you’re high, this masterpiece takes on a whole other level!

She went heavy, and the beats are so full of reason and authority that you can feel them groping your soul and sucking the life out of you, and if you don’t want to be a victim of your own undoing, it’s best to listen to the song with some strong shots of whatever registers with your tolerance level.

So, if all you see are dollar signs, pour it up and toast to a prosperous future!

This 2014’s masterpiece still remains one of my favorite music videos of all time- just imagine a hundred years later and people are studying our culture and they stumble on this record (crazy right!).

While at it, also imagine how the director would have explained to the actors on what they were supposed to do!

That aside, the next time you decide to gather around and have the time of your lives, this tune right here is the perfect chaser for those strong shots- the shots would actually need less convincing with such kind of dripping beats and the way they drop orderly from head to toe; don’t you ever forget that!

13 Proven Reasons Why Is Music Important To The World

We can all agree that we miss this legend- an EDM Mozart, an irreplaceable DJ! The world undeniably misses his hand gestures.

Songs like these made the late 2000s and early 2010s feel like a long summer party. This is one of those charged-up songs that would really go well with shots in hand as you compete among your party mates on who the strongest amongst you there is.

For maximum impact, drinking and jumping up and down to these dazzling beats really does well to register the magic and create those unforgettable moments- it also counts as one of the best ways to honor this legend.

The year is 2022 and the song is still banging like it was released yesterday! Hold that cup filled with liquor, point it to the sky and sing your way to the dancehall, “Man, I Love to get on, I love to get 2 on, when the drink be too strong…”

This is the perfect theme tune for that beach party as friends, family and strangers are all brought together by good music and great times.

So hoist that cup up and the next time you drop it, let the throat feel its wrath!

One hit wonder, but what a legend. This rap enabler gave us a glimpse of his talent and disappeared just like that!

This masterpiece will forever be legendary no matter what year it is. This would be a hit even today and any child of the 90s and early 00s misses those eras like crazy.

These were the times when people actually danced and had good times at parties. If you ever decide to take a memory lane down the past, get yourself an expensive bottle of Whiskey and pour yourself abundant shots as you get tipsy to the nostalgia of these great eras!

Well, it’s never a drinking party without the blessing of the Industrial icons and power couple.

It might astonish you that Beyoncé has been dangerously in love, crazy in love, drunk in love and you are still single- horrible right?

Anyway, this song hits differently when you’re actually drunk. And in all honesty, there is nothing quite magical like returning to an old song and feeling that rushing flood of memories from the year that the song came out in your mind.

The song doesn’t get old, even in 2022; it still pumps your heart. The best way to heighten the feeling off of it is to pour yourself an obscenely large amount of bourbon and take some hefty shots and feel whether you will end up drunk in love- sounds like a deal, right?

From one of the engineers of dancehall music; one of the remaining true icons in dancehall, reggae, and global music and this is one appropriate dancehall tune to lose yourself to in that smoky nightclub as you order more and more rounds and turn up with reckless abandon under the glittering glow of the dancehall beats!

While at it, tip every waiter at the bar and order rounds for everyone who looks at you in a funny way and because now you will have demanded the attention of everyone at the bar including the house DJ; majestically walk over and ask him politely to play the tune of all over again!

What a way to close the party than with the iconic lady whose silence on the music industry has been deafening! We all have different opinions but we at least agree that we miss this lady and the consistent masterpieces she used to release back in the day.

This is that theme song for the weekend and the weekend is what you make it to be. This is an invitation to shamelessly drink to anything worth drinking (and we both know there are endless reasons for that!)

More songs to take shots to:

So there you go folks, the next time you want to resonant with some songs as you take some shots of whatever it is your body resigns to; be it the whiskey, vodka, gin, tequila or even if some shots of water make you feel high (counts for something right!), have these songs make up the top 13 on your favorites playlist under the title, “Songs To Take Shots To!” I hope you enjoyed the read as much as I did while writing it.