Surely, a word as universal as Jesus wouldn’t lack in singers’ lyrics would it? And the thing about the word is that it transcends musical genres. Many might associate it with only Christian songs but it even eclipses the gospel genre with many artists finding a way to incorporate the word in their rock, hip-hop, afro, country, pop, r&b, and soul and in many other songs of diverse genres. Some have even referred to and compared themselves with Jesus- what was it called, blasphemy!

I tapped into the deep musical world and hereby bring to you 47 of the best songs with Jesus in the lyrics- let’s go! 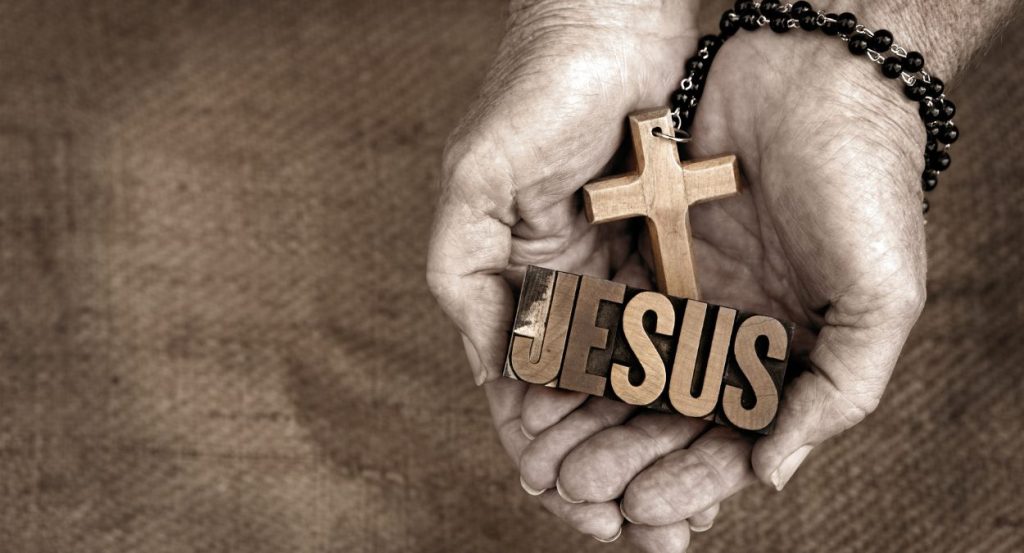 When Ye talks, you shut up and listen- this is an absolute masterpiece from his critically acclaimed 2021, tenth studio album “Donda!”

In what is an honest reflection of his life through the saving grace of Jesus and dedication to his late mother (may she rest in peace), the catchy lines that form part of the moving chorus go something like this;

“Tell me if you know someone that needs (Jesus, Lord)

Now we’ve been through a lot of things

Tell me if you know someone that needs (Jesus, Lord)

Boy, this is one of the rawest songs and the most inspirational songs I’ve ever listened to. In what was perhaps the beginning of the greatest comeback in rap history after being incarcerated for 12 years!

He was the victim of a legendary diss (as far as radio play and popularity) and suffered astronomical levels of scrutiny via social media.

He continued to be himself and not lose his authenticity and dropped bangers after bangers until he brought the fans back in the fold.

In this tune, he references Jesus in the line;

“Ooh, get them off me, try to crucify me

This is by far my favorite song with Jesus in the lyrics, and who doesn’t love a Destiny Child reunion?

They shattered every cliché about female groups and women in the music industry in general. They proved that girl groups could be really successful, cooperate, have extremely successful solo careers, and still come back together and support one another. Much respect to them!

This song is everything and also showcases the trio’s deep appreciation for African heritage and music.

This song is so catchy and I love me some Kelly voice! Indeed, “When Jesus say yes, nobody can say no”

This tune references Jesus as the new black. And you’ve got to admire this Lady Gaga era. She got so much criticism then but it was honestly her best era. I know in 20 years I’ll still be thinking about how flawless this album and age was.

This was Gaga’s crowning achievement in my opinion. The diversity of the music is amazing. It has everything. Disco? Check, Metal? Check, Soul? Check, Country? Check. It is a true testament to her flexibility and raw talent. I dare someone to tell me that Lady Gaga is not the best artist of the 21st century!

“Amen Fashion, on the runaway

This is for all the ones who watched their loved ones slip away from them as the unforgiving waves of death took them away.

This is gorgeous, raw, sad and real- what a haunting and perfectly written track! Taylor once said that she couldn’t sing it live as it is too emotionally difficult. She had to leave the room as well when it was playing during the Lover covert sessions. And she decided to sing it to the world when we needed the most a message of hope. What a selfless artist!

“Holy orange bottles each night I pray to you,

Desperate people find faith so now I pray to Jesus too”

It is not uncommon for you to interact with the #freeworldboss every once in a while with the Jamaican people and dancehall lovers begging for the Gaza king to be freed from prison.

Having being incarcerated in September 29, 2011 with multiple counts of murder, his physical presence has always been revered by his millions of worldwide fans. Though he still releases music from prison, it still isn’t the same way as having to watch him perform live and tour various countries.

In this track he flexes what his celebrity status has been able to get him.

This is an absolute emotional and hopeful masterpiece. When Dolly Parton turns the volume up and is almost screaming “There was Jesus”, chills run all over and through a listener and when the cells in your body react to the sound of his name, the feelings are truly indescribable.

“Everytime I tried to make it on my own,

Everytime I tried to stand and start to fall,

All those lonely roads that I have travelled on,

The intro when Whitney hit the first note always does it for me…I break down. What a wonderful anointed voice!

I hope she is singing with the angels in heaven. You can tell from her voice that she was a warm-hearted woman with a towering depth and mammoth heart.

Whitney Houston is by far the best female vocalist of all time, gospel or secular she was outrightly the best. May she continue resting in peace!

For the Bible tells me so (tells me)…”

This top trending gospel by the Nigerian songstress Sinach has been translated into more than 50 languages. It held the #1 spot on Billboard’s Christian Song Writers for a record more than 10 weeks running and is the tune to make you see the light at the end of the tunnel.

It is so hopeful and sung with deeply emotional vocals that exude the emotions so perfectly.

“You wipe away all tears,

You mend the broken heart,

You’re the answer to it all,

Should you be concerned if one day you got so high and saw Jesus? Well, this was the perfect duet from Miley Cyrus and her sister Noah Cyrus.

You’ll appreciate Miley’s gentle demeanor here. She’s careful not to overshadow Noah’s calm vitality, and you can tell she adores her little sister.

They’re like the sun and moon, and this performance is like the perfect eclipse! Noah has the same voice as Miley when she sings quietly. Their voices match and mingle like milk and honey. It’s unbelievably tasty.

That I saw Jesus”

This brings back memories. It’s so melancholic and nostalgic and one of the most heartfelt songs on the “Unapologetic” album.

She sings like a queen and I feel like even though it wasn’t famous like the other songs off of the same album, it was the most honest and moving tune.

It remains to be one of Rihanna’s most underrated songs ever. It’s such a gem and shows the complexity in her voice!

I swear I wanna change,

This multitalented American singer, songwriter, record producer, and instrumentalist was taken away from us in the year 2019. Up until then, his voice remained the same- he was still singing with the same range and clarity.

This brother had been given the gift of a great anointing through his music and his beautiful voice. “Mercy” will minister to everyone, especially during their times of adversity. As this song elevates our spirits, we must continue to pray and support one another.

(Have mercy, have mercy on me)

Everybody remembers this masterpiece from their 2018 joint album, “Everything is Love”, right?

Remember when Beyoncé said that everybody is her type…where is the lie? This was a deservedly acclaimed album and the power couple went ahead to showcase that they still had it in them to astonish the world of R&B/Soul and Hip-hop/Rap. JAY-Z goes extra hard on them verses;

Who said Gospel songs can’t be happy and get groovy?- this enchanting groove is spiced up with a live funk and soul style with the backing choir doing the most to make sure a listener is heavily invested throughout the track’s length.

Many people who have survived near-death situations and mental upheaval can relate to the message in this song: God has a plan for their lives. “Love Theory” ministered to them in so many unexplainable ways that Jesus shines a light in their darkest hours!

“Loving you will be (Jesus, loving you)

When Montana was still new to the game, he still had that swagger and true character, and he was turning heads all over the rap industry!

This banger with Fabulous was explicit and raw, with the bars dropping heavily like rockets in the Afghanistan war!

“Giver her d*ck, and maybe something nice

That head off the chain, Jesus Christ”

When you fall in love with the wrong person, you tend to love the wrong people! It’s fascinating how Noah’s tone pretty much sounds like her big sister’s Miley yet their singing styles are completely different.

The beats in this song, the weird sounds, and the instruments used gravitate me towards her music more and more…I admire artists who use sounds like these. And when you have the perfect complement in Labrinth, then you go on to make a near universal duet like this!

Felt those lips tell me 21 lies

You’ll be the death of me

Lovin’ you could make Jesus cry”

Oh, she is the goated queen of rap- in fact, Nicki Minaj doesn’t need a Grammy, the Grammy needs her!

It’s crazy how she predicted the future in this song, everything she said is happening now. She’s such a Queen, legend and when she’s gone the industry will feel it hard!

People don’t understand why Barbz idolize Nicki; she’s the reason many women were able to stand up for themselves, inspired them to be bosses, encouraged them to finish school and never give up on themselves.

She deserves everything she has.

This moving testimony that transcends the energy and ordination of gospel music was written by Chris Brown, Jason Ingram, and Dante Bowe. And I mean…can we just take a moment to appreciate Maverick City Music and Elevation Worship coming together!

Worship music has never been this phenomenally good. I’m glad Jesus never says, “This is the last time I’ll put you back together.” Amen.

“Oh, the power of my Savior’s blood

This is what retaking the throne looks like- you can’t be a genius without flaws! Kanye West is a musical prodigy.

Every song on the record was dubbed the “greatest song on the album,” and guess what? Nobody was wrong!

Kanye is simply proving that his songs would still hit even if he switched completely to Christian music. There are no other rappers who make songs like this.

“Jail” gives you energy as you’ve never felt before. It’s nostalgic, strong, heartbreaking, and eye-opening all at once!

You are not in control of my thesis”

I don’t think people know how amazing the art is behind this. It has no beat; it’s more like spoken poetry—very unusual and breathtakingly inventive. Unquestionably ahead of its time: A work of art!

This isn’t a Slim Shady rap, nor is it an Eminem song. It’s the Marshall Mathers story… It’s a total knockout, full of raw emotions. It’s not that the song didn’t deliver. It’s the folks that don’t get it!

“I walk on water

But I ain’t no Jesus”

More Powerful Songs With Jesus in the Lyrics